(as Maroney Sparks, KNG-TV Station Owner) Billionaire Maroney Sparks is a man uninhibited by morals, a condition he considers both a measure of his success and the price of doing business. He’s plotting to make millions by secretly sabotaging station KNG-TV. Rik Sansone has been seen on Last Comic Standing and MTV, and on stage in Summer ’69: The Musical Happening, and the Boston premiere of SubUrbia (2 Eliot Norton awards). Rik publishes and writes/illustrates SPAZ COMICS – Where Stand-Up Comics Sit Down and Draw. His Illustration and design work includes clients such as: The Clyde Fitch Report (Pulitzer Nomination), Super Group GO, Willow Street Press, Planet Records, Pear Tree Design, Standing Room Cap., Inc., The People’s Improv Theater, and “The Kong Show on TV!”

(as KNG-TV’s new accountant Mo Flemkoff) Maurice has appeared onstage in various roles and worked behind the camera in several capacities on some very indie film crews. He would like to thank Powella Productions for the opportunity to combine those two for some very silly sketch work. In his secret identity, Maurice is a not-very-mild-mannered freelance graphic designer and illustrator. On “The Kong Show on TV!” as Mo Flemkoff, he is a man who once did something bad with numbers and now subsequently is in the witness protection program, and now is also a mole, not the furry kind, the informant kind. 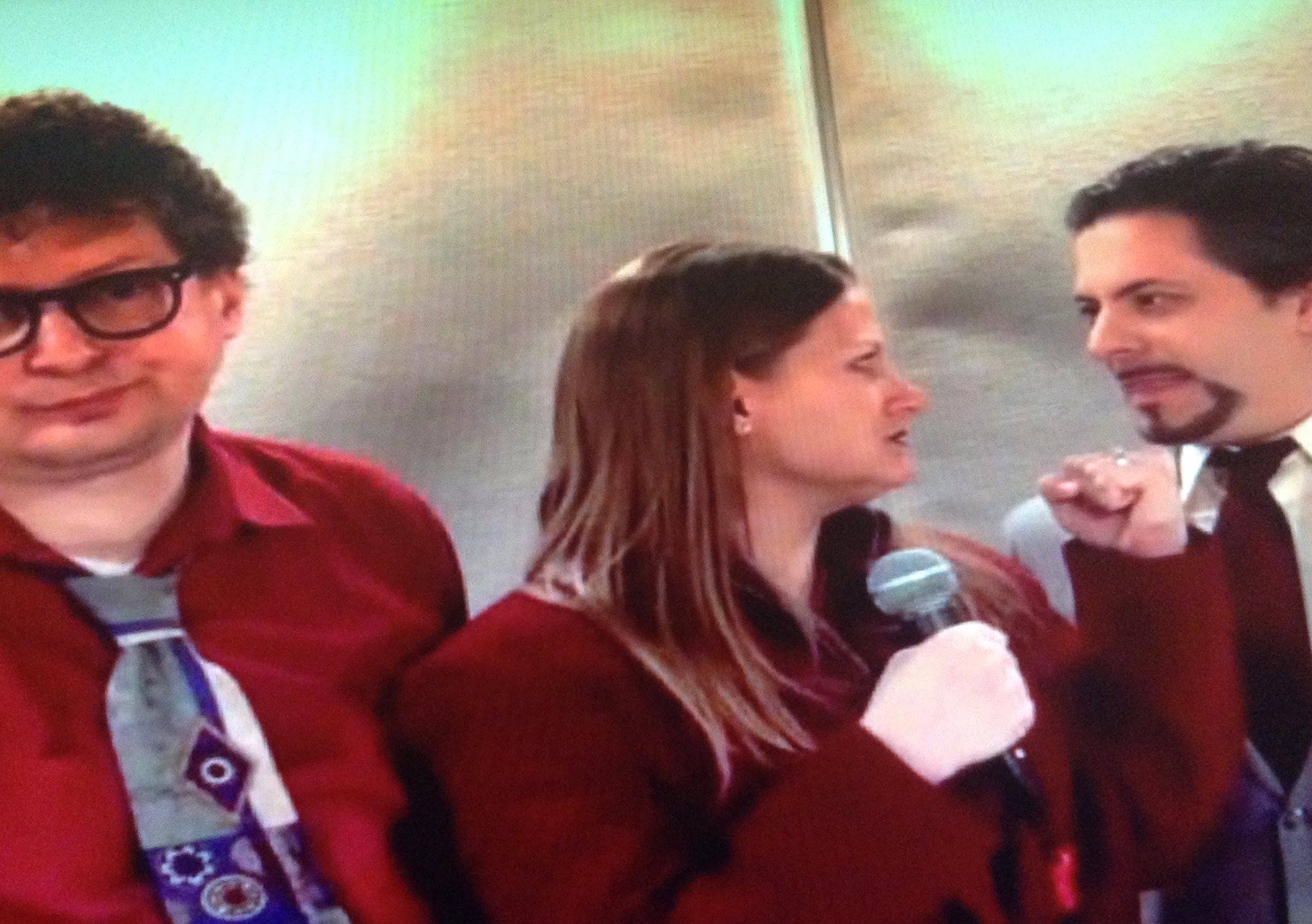 (Amanda McDuffy, New York Entertainment Times Reporter) Amanda McDuffy is a force to be reckoned with, a driven career woman, strong, beautiful and ambitious, Billionaire Maroney Sparks finds her simply delicious and desperately wants to have her for dinner. Is she the sort of woman Maroney Sparks would consider giving up bachelorhood for? Stay tuned. Heather Suzanne is thrilled to be a part of “The Kong Show on TV!” given her television start was behind the scenes as the “Boom Girl.” Not a bad step up for a former dancer, turned nerd web developer! When she’s not about to deck Maroney Sparks, she can be found getting the nest ready for baby coming soon!

(as Lenny Linguini – Restaurateur, Sponsor of The Kong Show on TV!) Oscar would like to thank Powella Productions profusely for their patience and understanding, with no prior experience in front of a camera they actually let him star in an episode or two of The Kong Show On TV! Even having the confidence to let him re-write some of his lines (which he couldn’t remember anyway). And yet, not unfriend him on FaceBook. His biggest takeaway, performing children’s magic shows allows for a lot more ad libbing! 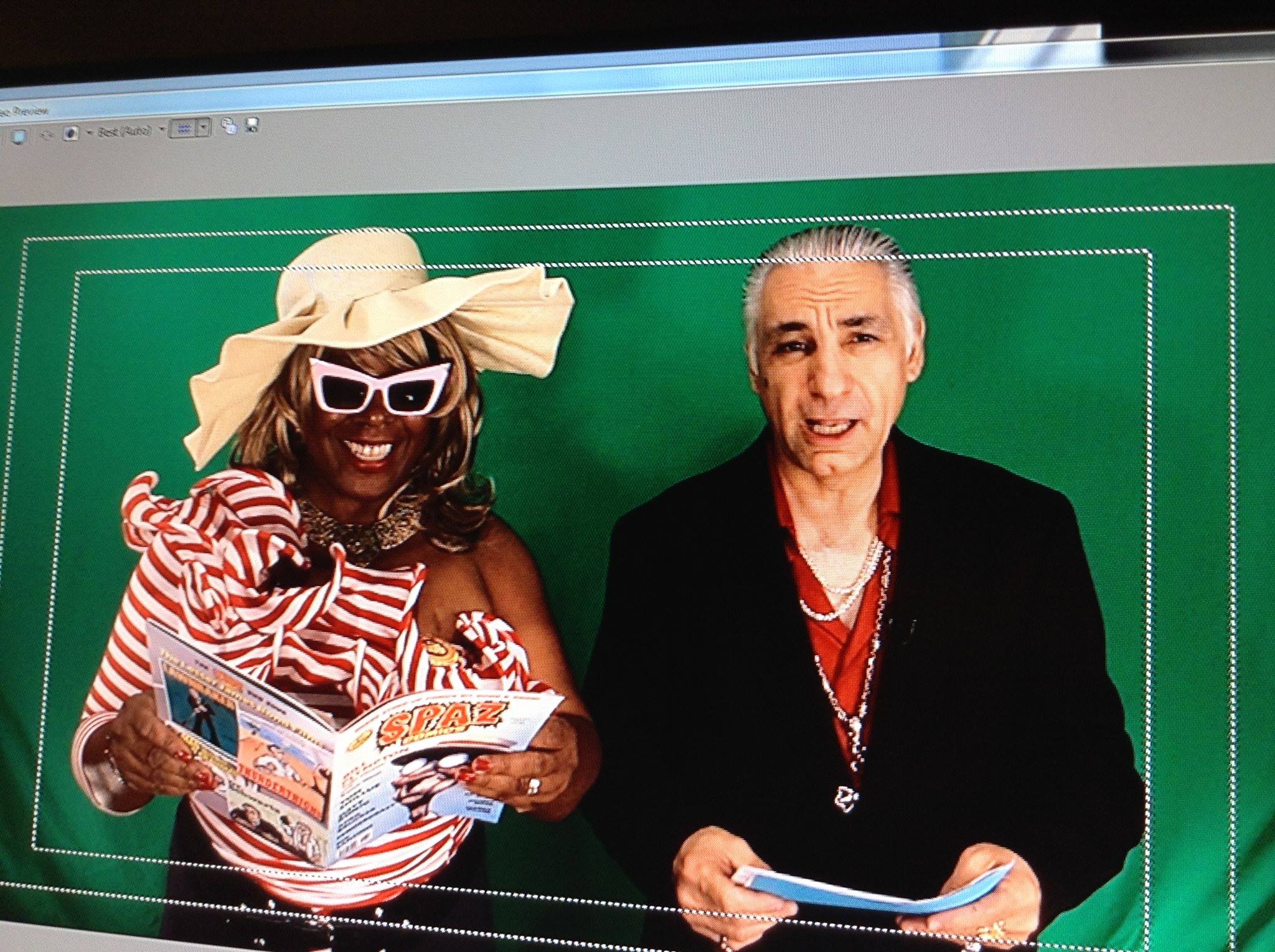 (appears as the wacky Miz E with a Z!, the co-host of KNG-TV’s “The Kong Show on TV!” and also as her own evil twin sister Madison Lynne, KNG-TV’s station manager) Ella Louise has made appearances both on stage and on TV. She has appeared at comedy clubs throughout the NYC area. A former child-star, she once appeared in a Girl Scout cookie commercial with the Brady Bunch’s Ann B. Davis. On “The Kong Show on TV!” she is that force of nature and fun frantic antics that is ‘Mz. E. with a Z.’ Former belly dance instructor, roller derby queen, now devoting her time to co-hosting the biggest little vaudeville style/comedy variety show on KNG-TV. Hired by the station manager and her twin sister the evil Madison Lynne to torpedo the station, she has enthusiastically joined forces with one Chuck E Baby to do the exact opposite and create a TV phenomenon that is bigger than Godzilla. Consider her your comedy conductor on the express train to a place that is more than just sketch, on a journey that is more than just stand-up, with an itinerary that is more than you can imagine. Your next stop up ahead is: “The Kong Show on TV!”

(as Chuck E. Baby – host of KNG-TV’s hit comedy variety show “The Kong Show on TV!”) Powell Leonard has made appearances both on stage, on TV, and also as a character in a video game. He’s a dancer, a musician, and an artist of unusual talents. He once had a gig that consisted of being covered in full-body plaster, and subsequently he became a full set of mannequins that can be seen signing the Declaration of Independence in the Philadelphia History Museum. In New York City, he remains a man of many hats. An actor, writer, producer, and MC of the biggest little vaudeville-style comedy variety show in town “The Kong Show” live on stage, featuring some of New York’s most amazing performers. “The Kong Show on TV!” is his latest endeavor, filmed in New York, first broadcast on QPTV, and now available on Vimeo. “The Kong Show on TV” is submitted as an existential exercise, featuring the life and times of one Chuck E. Baby, MC extraordinaire of a vaudeville style comedy variety show at station KNG-TV. Considered by some to be the Clown Prince of Comedy at KNG-TV, considered by others to be the Crown Prince of Chaos at KNG-TV, Neither title would offend or surprise him, seeing how he lives in his own little world, a world where everyone knows his name, and the word ‘normal’ is only a setting on the clothes dryer. A world that’s more than just sketch, a universe that’s more than just stand-up, a dimension that’s more than you can imagine. And that dimension is called “The Kong Show on TV!” 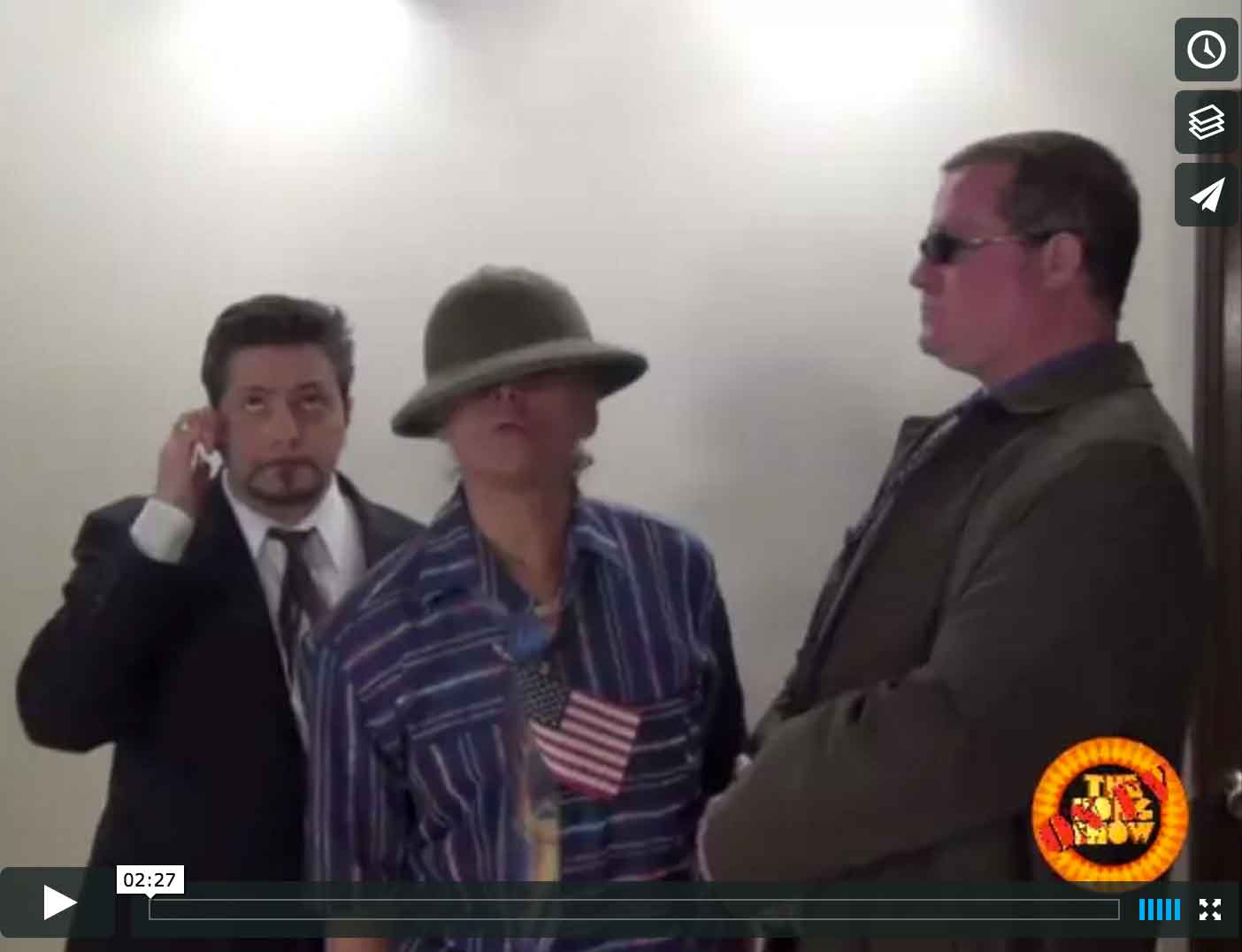 (as Marty Portdebra – Talent Agent / Secret Agent, Magician, Spy, part of a international spy ring infiltrating KNG-TV) In real life Rene Clement actually is a magician (not a spy) and has been performing a comedy and magic act for over 30 years. He has received many awards over the years including being one of the first to receive the Society of American Magicians North Atlantic Region “Award of Excellence” in 2014 and the International Brotherhood of Magician’s “Magician of the Year” in 1996. Besides the Kong Show, Rene’s television appearances include “The New Yorkers”, “FOX & Friends” and NBC’s “TODAY SHOW”. 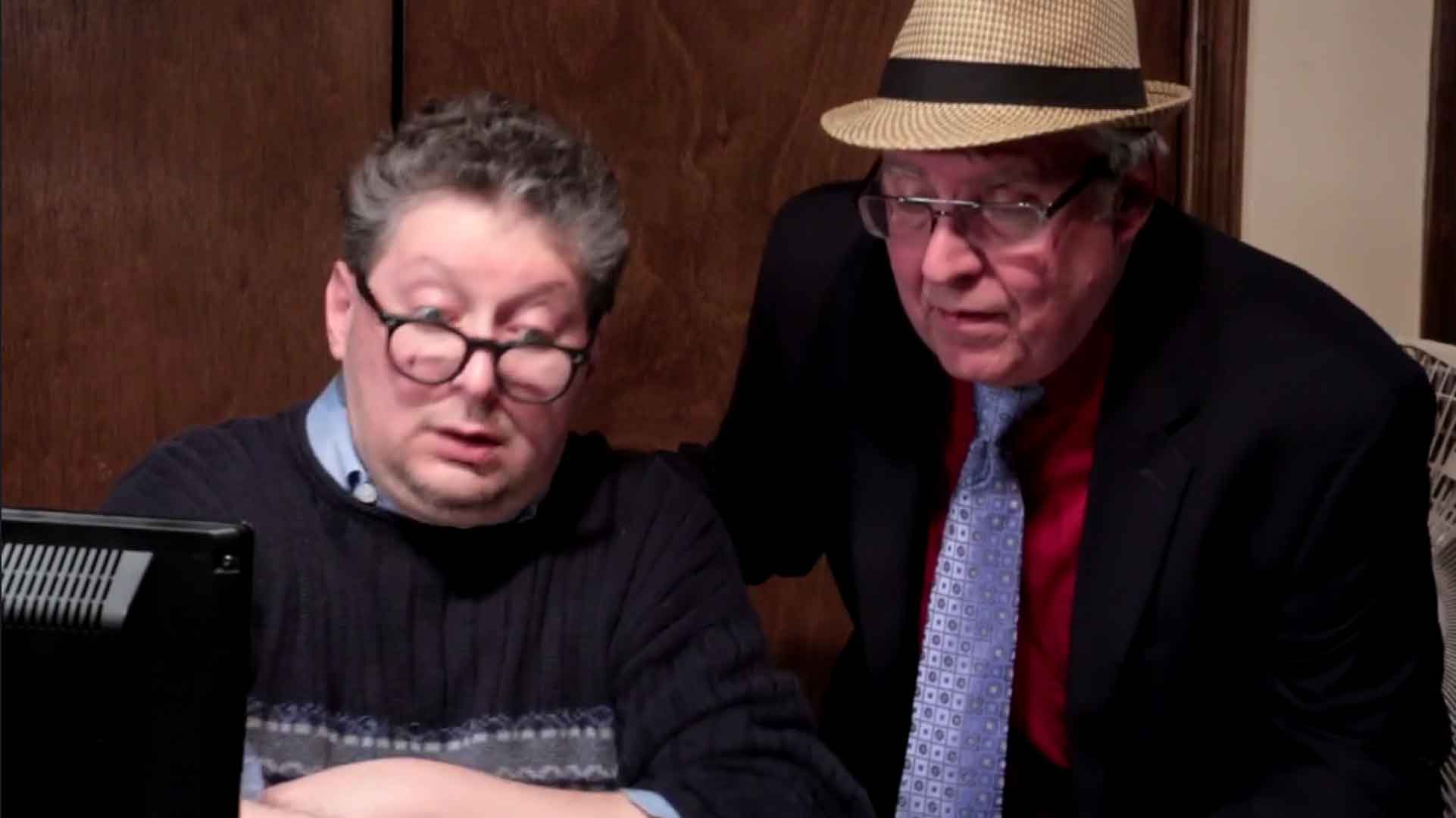 (as herself, Frau Stassi – not her real name, though she agreed to re-enact her story for us for “The Kong Show on TV” her real identity remains a secret.) She’s with a group that calls themselves the consortium or the syndicate or something mysterious sounding. She likes to carry cold hard cash. She likes to hold secret meetings in secret locations, like dark underground parking garages. She carries a pistol in her purse. Some call her a stylish blond of questionable gender. Others call her dangerous. Some call her a butcher, others a baker, or a candlestick maker. Whatever else she might be, she’s a spy. 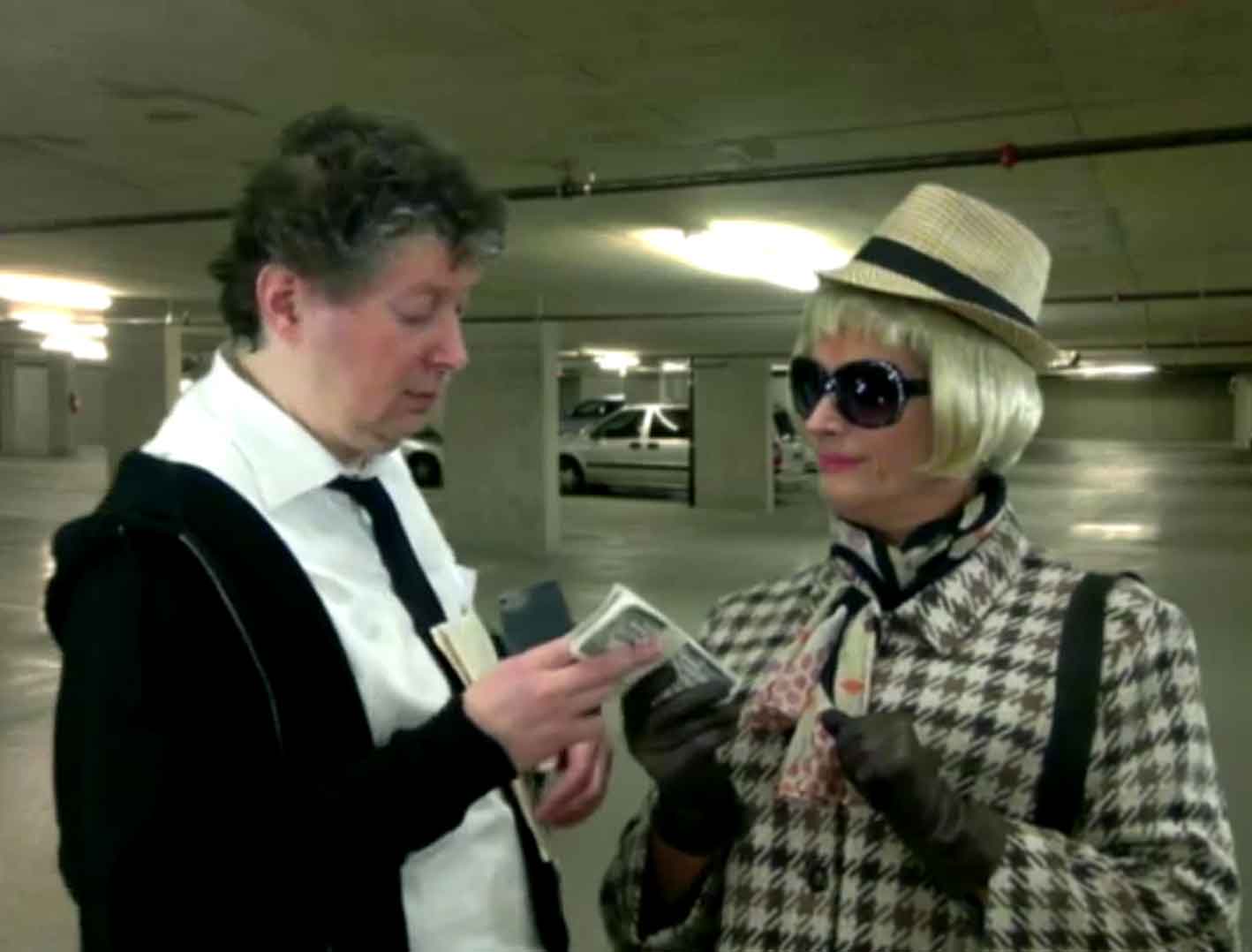 “Spies, Lies and Audiotape.” turns out that KNG-TV’s new accountant Mo Flemkoff (Maurice Kessler) is not only in a Federal witness protection program, he also happens to be selling information to a spy called Frau Stassi.